Woman Becomes YouTube Star by Eating into a Microphone

on March 06, 2021
Spirit Payton is one of YouTube’s unlikeliest stars. In just under two years, she has grown her channel, ASMRTheChew, to over 160,000 subscribers and had several of her videos go viral, with millions of views, all by making chewing noises into a microphone. From popping giant pimples to squashing bread with their faces, we’ve seemed people come up with all kinds of crazy ways of attracting attention online, so I guess it’s not that big of a surprise that someone managed to make it big on YouTube by making loud eating noises into a high fidelity microphone. Spirit Payton does post the occasional makeup tutorial, but her eating videos are pretty much her bread and butter. She takes requests from her fans and eats their preferred foods on camera, chewing it slowly and loudly as part of what is known as an ASMR therapy session. 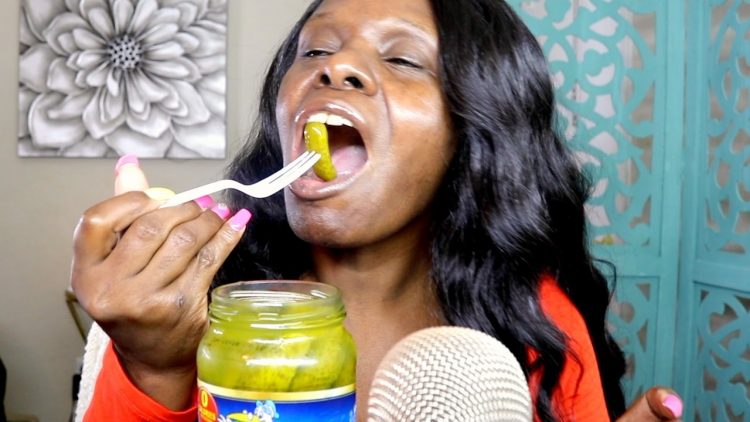 For those of you who are not familiar with ASMR, the term stands for Autonomous Sensory Meridian Response, and it is described as “an experience characterized by a static-like or tingling sensation on the skin that typically begins on the scalp and moves down the back of the neck and upper spine, typically triggered by specific acoustic, visual and digital media stimuli.” While there is currently no scientific evidence that ASMR has any health benefits whatsoever, anecdotal evidence suggests that the triggering of this sensation has a positive effect on people suffering from anxiety, depression, and insomnia.

There are many known ways to trigger ASMR, like crumpling paper, scratching or tapping a surface with your nails, or simply whispering, and while Spirit Payton does all them, she specializes in inducing the tingling sensation by chewing into a microphone, as emphasized by the name of her YouTube channel, ASMRTheChew.

Payton was reportedly introduced to ASMR by her daughter, as a way to deal with anxiety and depression, after suffering major surgery that left her unable to work. After experiencing the benefits of this therapy first-hand, the single mother decided to help others like her, by practicing her ASMR on YouTube. She started off slow, but never gave up, and her subscriber count grew at a steady pace. Then someone shared one of her chewing videos, and it went viral. It’s been smooth sailing ever since, and today, her videos routinely get tens of thousands of views, with a few reaching several million.

People apparently love hearing her eat into a microphone and even send her requests and tips on what food try in the future. She has had great success with crunchy pickled cucumbers, but she’s eaten everything from spaghetti to ice-cream, fried chicken, and candied apples. Her videos are said to help people relax and fall asleep easier.

So if you have a crazy idea and dream of becoming a successful YouTuber, I say go for it! If Spirit Payton made it by eating into a microphone than you can probably do it too.


Oh, and if you hate loud eaters, you’re going to “love” ASMRTheChew!