on May 18, 2017
No visit to the Bavarian region of Germany is complete without spending time at the famous Neuschwanstein castle, which is said to be the inspiration for Walt Disney's Cinderella's Castle. 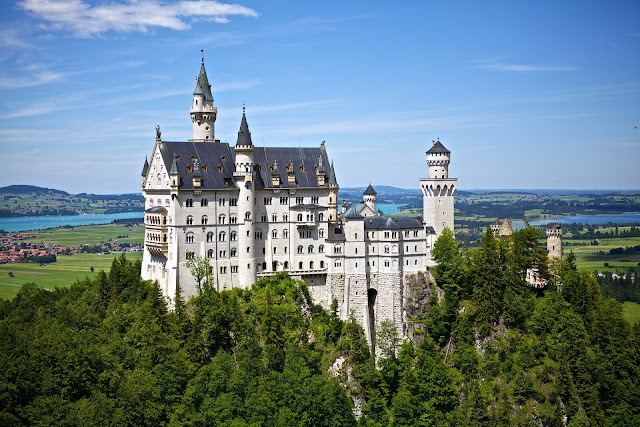 loading...
Sitting high above the Alpsee Lake, surrounded by the towering Alps, the Neuschwanstein castle looks like a vision out of a fairy tale. It is said to be the most photographed building in the world and is characterized by its rising spires and towers and sits atop the Pöllat River gorge.

Construction began in 1869, under the orders of King Ludwig II of Bavaria, it was never fully completed by the time of his death in 1886.

For a castle, it was equipped with some very surprisingly "modern" conveniences. Each floor has running water courtesy of a mountain spring that is 200 meters higher than the castle. Additionally the castle has flushing toilets, which were extremely modern for the time.

Ludwig was a patron of the German composer, Richard Wagner, and many of the rooms are decorated with depictions of the Germanic legends he immortalized in his operas. Particularly, the Singers Hall, which occupies the entire fourth floor of the castle, is dedicated to the life of Parsifal, hero of one of Wagner's most famous opera.

The castle rises some 300 feet above the village of Fussen, which is itself the highest town in Bavaria. To get to the castle, one must take a narrow switchback road up to the castle gate. Some 1.3 million people make this trip each year, making the Neuschwanstein castle the most popular tourist destination in Germany.