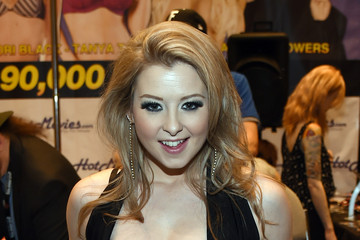 The career and life of Sunny Lane could have been completely different had things panned out as she originally planned. A talented figure skater, she was in preparations for the Olympic trials when disaster struck her in the form of bunions.
The recovery time after the surgery put her completely out of the picture for Olympic glory. So what does a fit, young and attractive girl do to support herself? Well, strip naturally, because it can pay handsomely.

The following year she was invited to attend the AVN which eventually resulted in a prosperous career in adult movies.

Now to the parents, Mike and Shelby Hodges. Well, I don’t know about you, but even talking about sex with my parents was a difficult subject and one which I preferred to avoid. Actually having them manage my sex on the other hand, well it’s just weird. This situation instantly reminds me of Jim Levenstein and his father from American Pie.

Sunny Lane herself is proud of the fact that her parents are so supportive of her decisions in life. Not only do they manage her porn career, but she also lives with them in an apartment.
Sunny believes that the reason they are so supportive is that they are very open-minded people, no shit Einstein, and they are active naturists. In other words, they are nudists.
I do believe though, and many naturists would probably agree, that shedding one's clothes to get back to a more natural state has nothing to do with sex. Maybe they’re just very supportive parents.
<source>
Viral Wtf
Loading...