on April 19, 2020
As countries around the world struggle to come up with ways of keeping people from going outside and slow down the spread of the novel coronavirus, Indonesian settlements are trying an unconventional solution – volunteer ghosts. 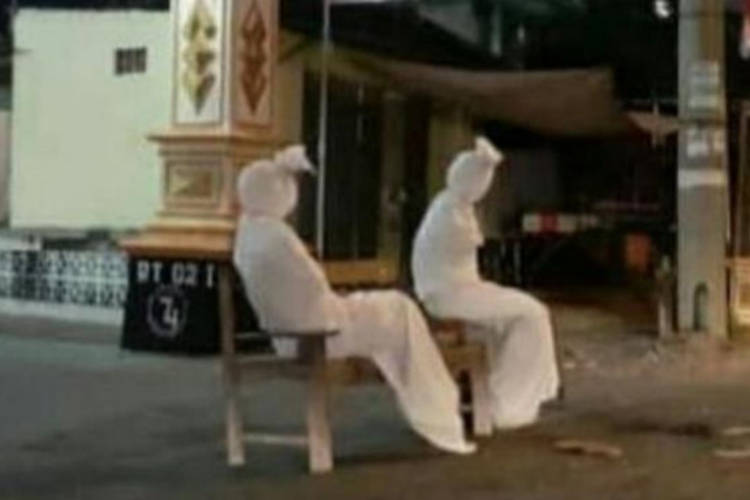 In Kepuh village, Central Java, people brave enough to venture outside their homes at night risk coming face to face with ‘pocong’ or shrouded ghosts, legendary figures believed to be represent the souls of dead people trapped in their funeral shrouds. The pocong monitor guests coming into the village and make sure that residents stay indoors as much as possible, to prevent them from spreading the potentially deadly coronavirus. Quite unusual for ghosts known as scary and creepy in Indonesian folklore, but then again, these aren’t your usual pocong.

The scary ghosts are actually volunteer youths trying to help village leaders keep people in for their own good. And if it means dressing up as shrouded ghosts, and putting on scary makeup, so be it. In fact, it was the community youths who proposed the idea to the village chief, and he was smart enough to accept.

“We wanted to be different and create a deterrent effect because ‘pocong’ are spooky and scary,” said Anjar Pancaningtyas, head of a village youth group, adding that locals required extra convincing to remain indoors. But the good news is the unconventional technique seems to be working


Since the pocong appeared, parents and children have not left their homes,” said resident Karno Supadmo, “And people will not gather or stay on the streets after evening prayers.”

“During the past three days, no residents were seen going out at night. Apparently, they’re scared of the fake ghost,” Anjar Panca, the keeper of Kesongo’s Al Himmah mosque, told The Jakarta Post.
Video Viral Wtf
Loading...